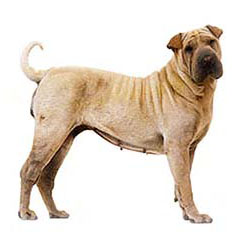 The Chinese Shar-Pei is an ancient breed with a tumultuous history, especially in modern times. The breed is believed to have originated about 2,000 years ago in the southern provinces of China. There, the dogs served as companions and partners to farmers who needed help to herd their cattle, guard their flocks and homes, and assist in hunting. They also were recruited as fighting dogs on occasion, although bigger, mastiff-type dogs soon replaced the Shar-Pei in the fighting ring. When Communists took over the Chinese government in the late 1940s, they decreed that dogs were a luxury and proceeded to almost completely eliminate the country's canine population. The Chinese Shar-Pei would have become totally extinct, were it not for the efforts of enthusiasts in Hong Kong, Taiwan and the United States. The Chinese Shar-Pei Club of America was founded in 1974, and the American Kennel Club accepted the breed into the Non-Sporting Group in 1992. In 2006, the breed ranked 47th among the 155 breeds registered by the AKC.

The Chinese Shar-Pei tends to present one face to his family and another to the world at large. To the latter, the dog behaves in a calm, dignified and aloof manner; with his family, the dog will lighten up and tap into his inner clown. Either way, the Shar-Pei makes a great watchdog who is devoted to his family. However, this dog can be overconfident and dominating, and needs a dog-savvy owner who isn't afraid to exercise benevolent leadership. Still, the Shar-Pei is devoted to his people – and that devotion makes him a poor candidate for being left alone for very long. He does better in a home where someone is around for much of the day, such as a work-at-home situation.

The Shar-Pei is a solid-colored dog, but those colors can range from cream to black. Other colors include red, sable, chocolate, apricot and silver. The coat should be bristly and coarse, as befitting the breed name (Shar-Pei means “gritty sand dog” in Chinese). This deep-chested dog is square, muscular and compact with a blocky head. Puppies have more wrinkles than adults. In adult Shar-Pei, the wrinkles are concentrated on the head, neck and shoulders.

Because the Shar-Pei is a confident, sometimes headstrong dog, he requires firm, consistent training by a person who is not afraid to demonstrate leadership. However, such demonstrations should never be forceful or coercive in nature. Special care should be taken to socialize a Shar-Pei puppy to children and other dogs when the puppy is young.

The Chinese Shar-Pei's coat needs a weekly brushing, and the ears also should be cleaned once a week.

Like all purebreds, the Chinese Shar-Pei has a number of congenital health issues. The breed's size can make hip dysplasia a problem, and the deep chest makes the dog vulnerable to bloat – a digestive emergency that is fatal if not treated. Other susceptibilities include malformed eyelids, demodectic mange, hypothyroidism, kidney problems, skin infections and allergies. Dogs intended for breeding should undergo OFA and CERF screenings first.