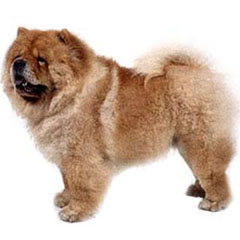 Historians differ as to the exact origins of the Chow Chow, but most agree that recognizable ancestors of the breed began showing up in pictures on Chinese pottery and sculpture as early as 200 B.C. The Chinese and Mongolian people bred the dog to serve as a hunter, herding dog, guardian, and draft animal. Chow Chows first showed up on English shores in the late 1800s. In 2006, the Chow Chow ranked 64th among the 154 breeds registered to the American Kennel Club.

The Chow Chow is a reserved, dignified individual. He doesn't particularly enjoy being petted, cuddled, or fussed over, especially by children. That said, he's generally easy to live with: quiet, clean, and usually very well-behaved. He also is more protective and territorial than many other breeds; anyone who passes in front of a home where a Chow Chow lives will draw a barking commentary from the dog. Care should be taken when introducing a Chow Chow to other animals; these dogs do best with somewhat submissive dogs of the opposite sex. He may view cats and tiny dogs as prey.

The Chow Chow is a medium-sized dog who ranges between 17 and 20 inches in height and weighs between 50 and 75 pounds. The coat may be either rough or smooth in texture; acceptable coat colors include red, black, blue, cream, and cinnamon. Furrowing on his face gives him a frowning expression. The tongue is blue-black in color.

Although the Chow Chow is quite well-behaved, even in puppyhood, he still needs schooling in basic manners. Those who train this lordly dog, however, need to respect his innate independence. Confidence, consistency, firmness when necessary, and a positive approach will make the trainer worthy of the Chow Chow's respect.

The Chow Chow requires considerable care to keep his lion-like coat in peak condition. Brushings should occur at least twice a week, and more frequently during the seasonal shed. Weekly pedicures and ear cleanings, plus periodic baths, also help the dog to look and feel his best. The Chow Chow does not do well in the heat. He should never be left outdoors in warm weather; for him, the best hot-weather haven is an air-conditioned place with a cool, tiled floor.

Like all purebred dogs, the Chow Chow has his share of genetic health concerns. Among the most common are hip dysplasia, progressive retinal atrophy, entropion (eyelids turned inward), and hypothyroidism. Breeding parents should receive OFA and CERF clearances before being bred. Prospective buyers should ask to see any such clearances before purchasing a puppy. In addition, like any short-nosed breed, the Chow Chow does not tolerate anesthesia well. Veterinarians need to take this factor into account when implementing any treatment that requires anesthesia.

Timmy, who lived with President Calvin Coolidge; Chin-Chin and Paw-Paw, owned by the character Michel on "Gilmore Girls."