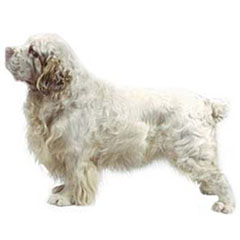 The most popular theory of the origin of the Clumber is that the breed began in the 1700s with a heavy-headed dog called the Alpine Spaniel. When the French Revolution broke out, the French Duc de Noailles is said to have reluctantly given his entire kennel of prized spaniels to the 2nd Duke of Newcastle at Clumber Park in Nottingham, England. Over the next 30 years, the Duke of Newcastle's gamekeeper developed and improved the breed. The Duke often gave Clumber puppies, as they began to be known, as gifts. By the mid 1800s, the Clumber started to attract attention and more people – not necessarily friends of the Duke – began to want them. Clumbers were one of the first dogs exhibited at dog shows, making their debut at an 1859 English show. The first Clumber Spaniel came to North America (Canada) in 1844. Breeding records were kept for Clumbers long before the American Kennel Club (AKC) even existed. When the AKC began registering dogs in 1878, Bustler, a Clumber Spaniel, was the 1,353rd dog of all breeds registered. Clumbers have always been fairly popular in England, but have never been particularly popular in America, despite their chunky charisma. Today they rank 121st out of 155 breeds. Despite that, they have won some of the most prestigious awards in the American dog world – as well the hearts of the lucky few who get to know them.

So you heard sporting dogs were full of hyperactive energy? Au contraire…here's a sporting dog who values his leisure time, enjoying the chance to sleep late and snuggle up next to you on the sofa. But give him the chance, and he's on his feet ready to go hunting, whether for birds in the field or toys in the yard. He's a natural retriever, and as often as not, he has a toy clamped between his jaws. He loves to walk, investigate, and swim. When retrieving, his energy seems boundless, but once it's time to quit, he's just as content to go home and lounge. He's also glad to meet new people, but he won't overwhelm them like some retrievers we know! He's pretty good with other dogs, but as a watchdog – well, let's just say you'll be better off investing in a good security system (or a Chihuahua).

The Clumber Spaniel is a long, low, heavy-bodied dog with large bones. He has a massive head with hanging flews (those pendulous upper lips), soft expression, brown nose, diamond-shaped eyes, low-set drop ears, and a pronounced stop (the angle between head and muzzle). His topline is level from shoulder to tail, and he carries his tail (which is customarily docked in America) nearly horizontal. His heavy build enables him to push through thick brush when hunting – he'll barrel along like there's nothing in the way. His coat, which is mostly white with some lemon or orange markings, is long, flat, and soft.

Clumbers would rather be playing than studying, and like a lot of students, they tend to get distracted looking out the window or dreaming of what's for dinner instead of paying attention. The secret is to make training a game, and to use lots of toys and treats for rewards. They're not the easiest breed to train, but once you lasso their attention, they can surprise you with surprising bursts of genius.

Brush the soft fluffy Clumber coat two or three times a week. As with most dogs with hanging flews, Clumbers can drool and dribble water on the floor, so you might need to keep a mop and a drool-rag handy. Trim the thick nails and brush your Clumber's teeth regularly, and make sure his inner ears stay clean and dry. Clumbers like to divide their day between resting and romping, and that's fine as long as they get enough exercise via a good long walk or a rigorous game or two in the yard daily. Given this, they tend to be quiet and well-mannered house dogs.

The Clumber's major health concern is intervertebral disc disease, a condition common in long-backed dogs in which a spinal disc ruptures (an emergency condition requiring immediate veterinary attention). Clumbers also have a greater tendency to get ear infections and eyelid disorders, notably entropion and ectropion, compared to other breeds. Ask your breeder and veterinarian about these problems, and what to watch out for.