"Retriever with a Perm" 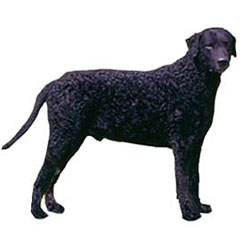 The Curly-Coated Retriever is one of the oldest retrieving breeds, although retrievers as a group are still relatively modern inventions in the world of dogs – there wasn't much need for them until it became common to shoot birds using guns. But by the late eighteenth century, the nobility prized retrievers, especially water retrievers, for sport hunting. The Curly-Coated Retriever probably descends from crosses of the Old English Water Dog, the Irish Water Spaniel (a small type of Newfoundland), and later, the Standard Poodle. By the mid-nineteenth century, Curly-Coats were the most popular retriever in England. In the late nineteenth century, Curly-Coats became one of the first breeds to be exhibited at any dog show. In 1879, one was even entered at the Westminster Kennel Club dog show in America. Exports to Australia and New Zealand established the breed there, where it's still popular. Exports to the United States in the first part of the twentieth century failed to gain the same sort of attention, however. One theory is that around this time, the breed got the reputation for being a hard-mouthed retriever, meaning it would bite down too hard on the bird it was retrieving. This might have caused its popularity to decline, even in England. Yet, the rumors were unfair and Curlys aren't normally hard-mouthed. Even so, it took many years for the Curly to live down that bad rep with hunters. Today the breed ranks 137th out of 155 AKC breeds.

“Moderation in all things” describes the Curly's temperament. She's moderately energetic, moderately playful, moderately affectionate, and moderately friendly toward strangers and other dogs. Owners would tell you she's the best when it comes to being an all-around companion, hunter, and housedog, however. She's one of the more sensitive of the retrievers, but also one of the more protective and courageous. She's very good with children, both gentle and fun-loving.

The Curly has the leanest look of any retriever, partly because she really does have a trim body and partly because of her form-fitting curls. The face has short hair, and the wedge-shaped head is longer than wide, with a shallow stop (the angle of the head to the muzzle) and tight lips. The Curly has large, almond-shaped eyes and a straight topline from shoulders to tail. The curl-covered tail is long and the Curly's coat may be black or liver-colored.

An eager learner, the Curly-Coated Retriever has a tendency to be easily distracted. Begin training in early puppyhood, focusing on attention exercises. The best way to get a Curly's attention is by throwing a toy or doling out treats for rewards. This is a sensitive breed that can get turned off easily by overly rough handling. A firm hand is all that is needed during its most boisterous moments. Gifted retrievers, Curlys quickly take to exercises involving fetching. Train throughout life as a constant reminder of rules and who's in charge. Curlys do best when given new challenges. Several Curly-Coats have achieved advanced titles in competitive obedience.

Combing turns the curls into waves of frizz, but getting the coat wet restores their tight nature. Just comb through the coat once a week, keep nails trimmed, and teeth clean. Like all retrievers, Curly-Coats like to get outside and play fetch, especially if they can go swimming at the same time. They need about an hour of exercise daily; fetching in the yard, walking around the neighborhood, training for canine sports like agility, catching a Frisbee, or water retrieving (check out the fun sport called Dock Jumping) are all good choices.

Generally healthy and hardy, the Curly-Coated Retriever's only significant health concern is hip dysplasia. Responsible breeders will have tested the parents of their litters for sound hips – ask to see the results. Of course, Curlys can develop other health problems, so keep up with regular veterinary visits.

The top Curly-Coated Best in Show winner of all time is Ch. Riverwatch Southern Cross.