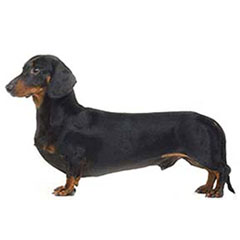 German foresters in the 18th and 19th centuries wanted a long, low dog with a high prey drive to hunt badgers, so they combined many different breeds to produce the Dachshund, which means “badger dog” in German. Built to maneuver inside a narrow burrow and bred for the courage and fire necessary to face the vicious badger, Dachshunds also had the strength and drive to hunt foxes and wild boar.The original Dachshunds had smooth coats. Later, spaniels were bred with smooth Dachshunds to produce the docile, mild-mannered longhaired Dachshund. Even later, smooths mixed with wirehaired terriers and pinschers produced the roguish wirehaired Dachshund. Dachshunds came to the United States in 1887 and soon became one of America's favorite breeds. Today, the Dachshund is the 6th most popular dog in the United States.

Feisty and intelligent, Dachshunds know how to get what they want out of their people using charm and a little clever manipulation, but they also rely on their people for affection, attention, and guidance. Like a strong-willed child, a Dachshund without rules will quickly commandeer the household and make life difficult for everyone. Although Dachshunds are self-confident and friendly with most people, they tend to bond strongly with one person. Alone too often, Dachshunds can become depressed or destructive. They need to be companions and they need mental stimulation, so they aren't a good choice for people who are gone a lot. 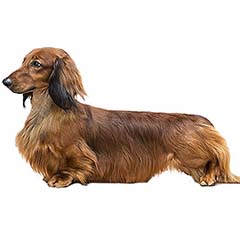 Long bodies, short legs, floppy ears, and mischievous expressions characterize Dachshunds, no matter which size – Standard or Miniature – and which coat type – Smooth (pictured above), Longhaired (pictured left), or Wirehaired (pictured below). Standards and Miniatures should be identical, apart from size, with bowed front legs, long tails, long noses, and bright eyes. Smooths have short, shiny coats in any solid color, two-color, dappled (dark background with lighter patches) or brindled (light background with dark stripes), but black-and-tan or red are most common. Longhaired Dachshunds have sleek, slightly wavy hair, longer on the neck, chest, underside, ears, and tail, in the same colors as the Smooth. Wirehaired Dachshunds have tight, thick, rough outer coats with a softer undercoats, bushy beard and eyebrows, and thickly haired tails. Their coats may be any color, but wildboar (a mixture of black, brown, and gray), black-and-tan, and red are most common.

Highly intelligent but not particularly obedient, Dachshunds learn quickly but get bored quickly, too. “Sit again? Why? Bring the ball back? Give me a good reason.” Short training sessions with plenty of motivation work best. Because they love food, healthy treats work well for training, but be careful – Dachshunds become overweight easily, putting a strain on their elongated spines. Keep training interesting and disguise it as play. If a Dachshund is having fun, that's motivation enough to keep learning. Housebreaking a Dachshund can be a real challenge. Intelligent and independent, they don't really see why they should have to go outside, although most will follow the rules most of the time. Patience and consistency are a must when housetraining a Dachshund. 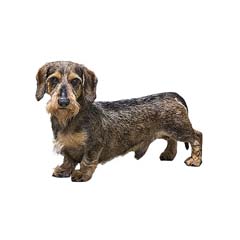 Brush the Longhaired Dachshund daily with a natural bristle brush and steel comb to keep the coat tangle-free. Brush the Smooth Dachshund with a natural bristle brush or hound mitt weekly to reduce shed hair in the house. A professional groomer can clip the Wirehaired Dachshund into a short cut with long beard and eyebrows, or the coat can be stripped – a time-consuming process of pulling out older hairs by hand or with a stripping knife, to make room for new growth. Stripping is the preferred coat care method for wire coats because it keeps color bright and texture harsh, but because it takes a lot of time, many pet owners have the dogs clipped down instead. This softens the coat and dulls the color, but pet owners don't usually mind.Also keep the Dachshund's big teeth brushed, thick nails trimmed, and floppy ears clean and dry.

Because of their dwarfed bodies and long backs, Dachshunds may develop orthopedic problems. Dachshunds should never jump off furniture or out of someone's arms, run up and down stairs, or play rough games of tug because these movements may rupture their naturally vulnerable spinal discs. Dachshunds are also prone to epilepsy, eye diseases, and hypothyroidism.